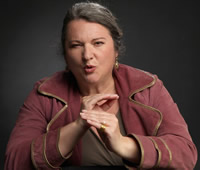 …had actually led to the triumphal march of emotional intelligence in 1995? With immediate effect and without ceremony this term replaced those “soft skills” which had hitherto been prescribed for improved management performance levels in the business sector. Do you remember? Up to this point in time reason had enjoyed absolute priority as a guiding force: This ratio determined courses of action and was intended to furnish calculable options for the future.

Unfortunately, however, this did not function in practice. Even “in those days”, in the 1990s, our lives demonstrated that not everything was calculable – people, nature and our ecosystem, for example. Then, after the Chernobyl catastrop0he, we learned that the incalculable entails global implications.

What came next? Similarly, the term intelligence, the scope of which had been enhanced to include emotion, merely led us deeper and deeper into the realm of quantitative positive thinking, to “more of the wrong medicine“. Emotions were mechanized and likewise quantified in conjunction with considerations of “self-control” and the “control of people”. The opportunity? Forfeited.

Instead, consumption-orientation intensified and imperceptibly displaced our inner independence. However, a panic-stricken glance at the dangers involved inevitably results in any consumption-orientated individual living in fear of incurring losses and being unable to act. You’ve guessed it, risk intelligence enters into play here!

Every possible course of action entails risks – though by no means dangers. In other words, it is necessary to distinguish between risks and dangers, the reason being that dangers necessitate immediate reaction whereas risks present us with active leeway. Awareness and access to one’s own resources are needed for the purpose of exploiting this leeway. It furnishes us with the requisite clarity regarding our own reality and our value orientations.

Risk intelligence reunites thinking and feeling and involves the inestimable advantage for each and every one of us of being able to develop possible courses of action for our own lives and regard them as feasible and attractive in this society. This is a great opportunity, but it also requires motion and enthusiasm. Are you on board? I would be delighted!